PERFORMANCES A DANTESQUE HALLOWEEN AT THE CASTLE 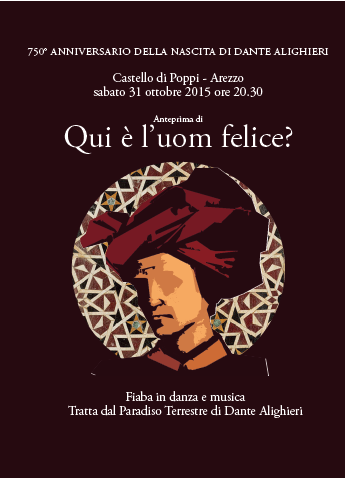 PERFORMANCES A DANTESQUE HALLOWEEN AT THE CASTLE

On Saturday, 31 October 2015, a performance about Dante Alighieri’s Earthly Paradise was held at Poppi Castle, the Castello dei Conti Guidi: the premiere of “Is man happy here?”

This staging also draws inspiration from the ancient Celtic tradition, according to which on the night between 31 October and 1 November, the beginning of the Celtic year, it is possible to go against the laws of nature in extraordinary ways, even so far as to make the veil separating the two worlds, that of the living and that of the dead, so subtle as to allow full communication and contact between them.
The performance centers on Dante as a character, who in great solitude, penetrates into a fairytale world of the present, where he meets invisible, otherworldly creatures, souls, spirits, and heavenly beings (voice-offs). At the summit of Mount Purgatory and in the Garden of Eden, Dante, the character, meets the 750-year-old spirit of Dante, then an angel, the Spirit of Virgil, the Spirit of Matelda, and that of Beatrice, and many other fantastic and mythological apparitions. All this—accompanied by live music, projected images, castrato voices, and dances, at the magical Feast Hall in the medieval Poppi Castle, outfitted especially for the occasion to evoke the charms of the journey that unveils, of the veil that journeys, and of the journey beyond the veil. Thanks to the mysterious complicity of the benevolent and aristocratic castle, we breathe the air of the rite of passage between the company of those who are about to die and those who are eternal.

The cast includes artists from different Italian cities and different nationalities.
In the part of Dante, the character, young Neapolitan actor Claudio Fidia possesses, in addition to skill and preparation, an intriguing resemblance to Dante in the portrayal by Giotto in his fresco at the Chapel of Mary Magdalene in the Bargello in Florence.
The concept and direction by Stefania Maggini intends to present a free-composition staging, all the while attentive and respectful of Dante’s verse, which is left entire in its original version, and trimmed in the narrated parts. Furthermore, the subtext opens fantastic reflections on the Islamic roots of Dante’s system within the Divine Comedy, on the necromantic, shamanistic aspects attributed to Dante by his own contemporaries, owing to his broad familiarity with the otherworldly, and on the possible form of epilepsy that may have afflicted the poet, as biographical inspiration for explaining the vulnerable tendency of Dante, the character, to faint and lose consciousness.

In short, a sound and rich foundation for the orchestration of a truly great 750th birthday celebration for such an illustrious forefather as our own beloved and enduring Dante Alighieri.

Synopsis
After having visited the immutable darkness of Inferno and the hope-filled sufferings of Mount Purgatory, Dante, the character, continues his ascent toward the summit, arriving on the outer edge of the Seventh Circle, that of the lustful, where he meets an Angel guarding a gate of fire, through which he is obliged to pass in order to continue his journey toward the heavenly worlds. In fact, the Angel’s voice-off reminds him that:

“No one farther goes, souls sanctified,
If first the fire bite not; within it enter.”
(Pur. XXVII,10-11)

Dante, however, is terrified by the idea of having to pass through the flames with his still quite-living flesh, and he retreats, refusing to continue on, even when urged and reassured by the Spirit of Virgil, whom he hears only, as a voice. He succeeds in overcoming his obstinate desire to turn back only in view of his forthcoming reunion with Beatrice, resolving finally to pursue the path into the wall of fire. But once night has fallen, Dante falls asleep near the staircase rising to the entrance of Earthly Paradise, and he dreams of Lia, a prefiguring of Beatrice, immersed in a practical and active way of spirituality, rather than a life that is purely contemplative.

Upon awakening, Dante finds himself back in the Garden of Eden, where the Spirit of Virgil, manifesting as only a voice, crowns him lord of himself, then leaving him free to move about independently, without needing to wait for any sign of consent and direction on the part of his father, master, and preceptor.

“Expect no more or word or sign from me;
Free and upright and sound is thy free-will,
And error were it not to do its bidding;
Thee o’er thyself I therefore crown and mitre!”
(Pur. XXVII, 139-142).

While cautiously proceeding in his exploration of the extraordinary natural beauties, the poet hears the beautiful voice of the Spirit of Matelda singing. By means of an erudite conversation with her, he is initiated into the secrets of the sacred wood. Subsequently, he sees the purifying River Lethe and the sacred procession, composed of men, women, fantastic and mythological animals. Among these, the Spirit of Beatrice is concealed over a chariot drawn by griffin. Dante is overcome with wonder, stupor, and enchantment. He notices that familiar heartbeat of someone in love, which makes him certain that he has arrived in the presence of his beloved Beatrice, even if he cannot yet see her with his eyes.

Beatrice appears to him, with her eyes and smile still veiled, beneath a cloud of gold, accompanied by singing from choirs of angels. Dante, moved by an uncontrollably powerful emotion, turns around, as usual, to share also this astonishing experience with his only human and spiritual reference, Virgil. At that point, he finds with dismay that Virgil has disappeared forever, without leaving behind the slightest trace.

The powerful emotional contrast between the happiness of recognition and discovery of Beatrice, and the desperation and bewilderment for the sudden loss of Virgil, is so strong and sudden as to provoke in Dante in rush of consciousness and loss of the senses, leaving him to fall to the ground. At this point, Beatrice calls him and, awakening him, attracts him toward herself, beyond the veil.