A guided visit in the form of a fable for children of all ages, from zero to a thousand.

Angela Maria Tuccinardi  is an Italian painter who has lived and worked in California for many years.

The exhibition comprises 16 of her original works.

Following the exhibition there will be a pastel DRAWING COMPETITION among the visitors, titled: I, Dante.

The best works, as chosen by a jury of experts, will be awarded prizes and inserted as illustrations in the publication: The Pastel Comedy – Woodland Colors.

Note: the English text of Dante throughout the site is from Longfellow’s version, in the public domain.

Midway upon the journey of our life

I found myself within a forest dark,

For the straightforward pathway had been lost.

Beatrice am I, who do bid thee go;

I come from there, where I would fain return;

Love moved me, which compelleth me to speak.

No one farther goes, souls sanctified,

If first the fire bite not; within it enter,

And be not deaf unto the song beyond.

Remember thee, remember! and if I

On Geryon have safely guided thee,

What shall I do now I am nearer God?

“The sun departs,” it added, “and night cometh;

Tarry ye not, but onward urge your steps,

So long as yet the west becomes not dark.”

Eager already to search in and round

The heavenly forest, dense and living-green,

Which tempered to the eyes the new-born day,

Without more delay I left the bank,

Over the soil that everywhere breathes fragrance.

And when the car was opposite to me

Thunder was heard; and all that folk august

Seemed to have further progress interdicted,

There with the vanward ensigns standing still.

Over her snow-white veil with olive cinct

Appeared a lady under a green mantle,

Vested in colour of the living flame.

Up to my throat she in the stream had drawn me,

And, dragging me behind her, she was moving

Upon the water lightly as a shuttle.

I heard them murmur altogether, “Adam!”

Then circled they about a tree despoiled

Of blooms and other leafage on each bough.

Never descended with so swift a motion

Fire from a heavy cloud, when it is raining

From out the region which is most remote,

As I beheld the bird of Jove descend

Thereafter saw I leap into the body

Of the triumphal vehicle a Fox,

That seemed unfed with any wholesome food.

Firm as a rock upon a mountain high,

Seated upon it, there appeared to me

A shameless whore, with eyes swift glancing round,

And, as if not to have her taken from him,

Upright beside her I beheld a giant;

And ever and anon they kissed each other.

In front of them the Tigris and Euphrates

Methought I saw forth issue from one fountain,

But Eunoe behold, that yonder rises;

Lead him to it, and, as thou art accustomed,

Revive again the half-dead virtue in him.

From the most holy water I returned

Regenerate, in the manner of new trees

That are renewed with a new foliage,

Pure and disposed to mount unto the stars. 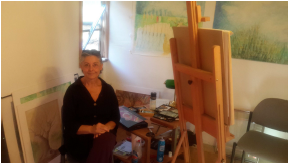 After graduating from artistic secondary school in Taranto, she received a degree in Painting at the Academy of Fine Arts in Rome, and a Masters in Aesthetic and Museum Communications at the Università di Tor Vergata in Rome. She studied at the Accademia Libera del Nudo in Paris. Painter and poetess, she teaches drawing and has studied with artists such as Roberto De Robertis, Franco Gentilini, and Felice Ludovisi.

Since 1998, she has been living in California, where she directs the private Leonardo da Vinci Academy of Visual Arts. The pastels presented here were born, in 2014, to respond with images to certain of Dante’s verses regarding Earthly Paradise.

“Anyone can learn how to draw with patience and practice. Then there is the talented one: drawing is part of his essence. And then there is the genius: the genius is the one who changes the way humanity perceives.”

"Everything becomes a reflection of one single vision: being here on this earth, which is only waiting to be transmuted; as R. M. Rilke says, ‘Earth, is it not this that you want, to rise up again, invisible, in us?’”

“It is the artist’s task to trace the ‘nonexistent’ line that unites and divides the human being from the earth, and from everything the earth represents as a world.”

"Everything you see is visible, but things become Art when you see the invisible."