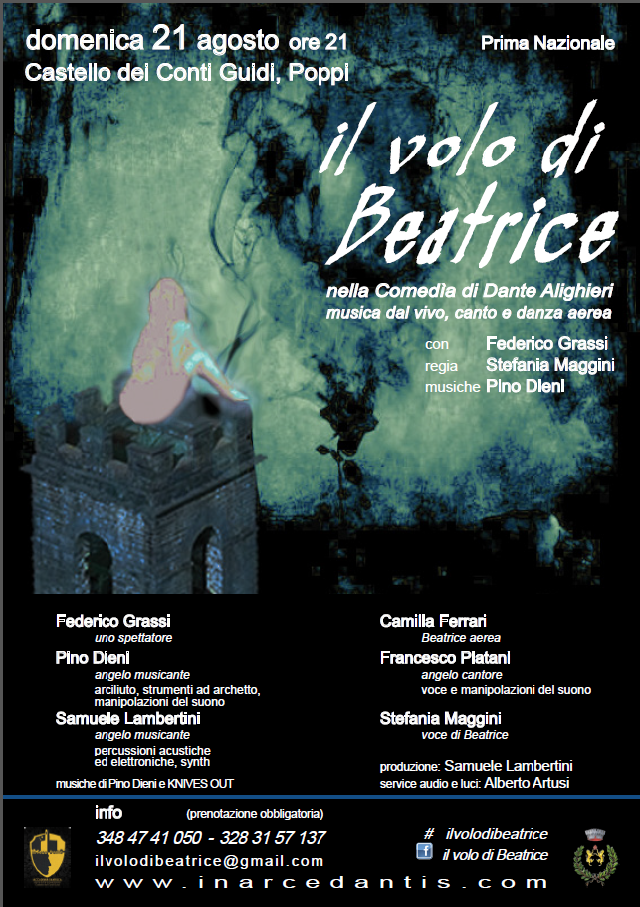 The Flight of Beatrice in Dante’s Commedia

Players, in order of appearance:

A person in the audience, Federico Grassi, an actor who graduated from the Theatrical Workshop of Florence directed by Vittorio Gassman, on seeing a copy of the Divine Comedy left to one side of the stage, gets up to pick it up, opens it, and begins to read. Then the spectator seems to begin remembering the verses by heart, as a school-day memory.

We are at the beginning of Canto II in the Inferno, where Dante, having just come out of the dark forest at dawn, begins his ascent of the hill. At sunset on the same day, however, he feels assailed by serious doubts: what particular merit of his was it that caused him to be chosen to visit the realm of the dead while still living? He is neither Aeneas nor Saint Paul, the only other two living beings who ever succeeded in descending into the other world while still flesh and bone. And these two did this because they were predestined by heaven to establish on earth the foundations of human society.

But why Dante? To allay these concerns, Virgil explains the reasons that prompted him to come to his rescue. Three blessed women had mercy on him in Heaven: the Virgin Mary, who recommended his salvation to Lucia, who in her turn urged Beatrice to remove Dante from the mortal danger in which he found himself. The heartfelt words and supernal beauty of the Blessed, who came down to implore him, render the Latin poet eager to obey her. At hearing the name of the woman he loved in his youth, Dante finds himself revived, and, without further hesitation, follows Virgil along the difficult path toward the gate to Hell.

It is a cascade of stories, one inside the other, a poetic narration like a series of Chinese boxes, that aerial dancer Camilla Ferrari shows us in her interpretation of Beatrice’s descent. Thanks to this first flight, from Heaven to Earth, Beatrice will, in the end, succeed in acting as guide to the heavens for her terrestrial beloved, Dante.

The Spectator’s reading now jumps to Canto XXXI of Paradise, where the poet has already been joined for some time in Paradise together with Beatrice. Dante observes with wonder and admiration the exultant spectacle of the Empyrean. Eager to ask a few questions of his angel Beatrice, the pilgrim turns to her, but in place of the woman he loves, he finds a saint, in benevolent and paternal attitude, St. Bernard of Clairvaux, the 12th century mystic. He, as a symbol of contemplative science, will substitute Beatrice in guiding Dante to the end of the journey, to the vision of God. Because the Poet wants to know where Beatrice is now, the Saint explains to him that she has returned to her seat, the third, counting from the highest. Dante sees Beatrice smiling at him one last time, then to return to divine contemplation. Beatrice’s return flight from Earth is now complete.

Throughout all the reading/memory of the Comedy by the Spectator, the environment around him lights up and comes alive with artistic presences: music, songs, dances, voices, giving life to a dreamlike representation of the double flight that Beatrice completes in these two moments of Dante’s tale. The flight of Beatrice from Heaven to Earth and from Earth to Heaven is a movement that generates and transforms through completing itself, leaving behind itself a trail of beauty and beatitude, the only one capable of dissolving and resolving conflicts both interior and exterior. The Spectator, as well, seems to participate in this double flight between Heaven and Earth, willingly allowing himself to be influenced and, perhaps even, changed by it. The ancient architectural components of Castle, thanks to an attentive and inspired lighting design, reveal all its innate and extraordinary scenic vocation, to showcase and enhance the boundless imagination of Dante.

The text that is recited and sung is excerpted entirely from Dante’s Divine Comedy: Inf. Canto II, 1-5, 31-142 and Par. Canto XXXI, 52-93, Pur. Canto XXXIII, 142-145. Only the final verse, which closes the performance, is actually of our own making, designed freely in neo-Dantesque style…

The songs sung a cappella by the Choir of Angels, the Associazione Corale Symphonia, directed and accompanied with tambourine by Gaia Matteini, who also rearranged them, are taken from the Laudario di Cortona, an Italian musical codex from the second half of the 13th century, containing a collection of praises.

The excerpts, all dedicated to the figure of Mary, are: Ave Donna Santissima; Venite a Laudare per Amore Cantare; Altissima Luce con Grande Splendore.