The Comedy through Voices: Count Ugolino

THE COMEDY THROUGH VOICES: COUNT UGOLINO 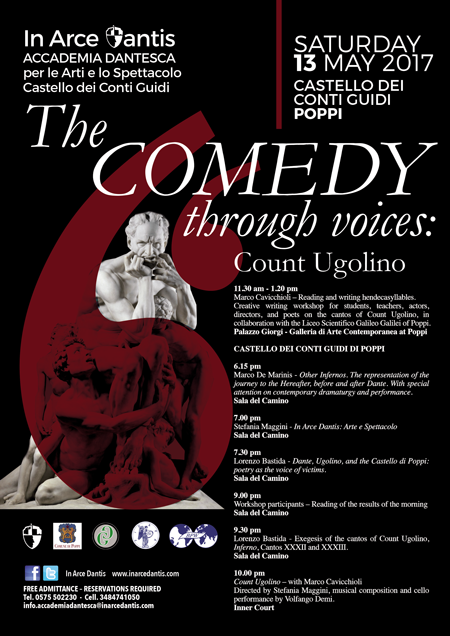 Marco Cavicchioli – Reading and writing hendecasyllables. Workshop for students, teachers, actors, directors, and poets on the songs of Count Ugolino, in Collaboration with the Liceo Scientifico Galileo Galilei of Poppi.

Cavicchioli’s workshop on reading and writing hendecasyllables is designed to examine the construction of the hendecasyllable — the prince of Italian verse — from the inside, so as to showcase its beauty, its structure, its musicality. Each participant will try his hand at writing a tercet in collaboration with the others, taking inspiration from the character of Count Ugolino created by Dante in the Inferno, Cantos XXXII and XXXIII, but also with reference to the “infernal” aspects of contemporaneity. Participants will then proceed to the composition of a small canto, to be read out loud and humbly dedicated to our greatest poet and to the attending public. The participants themselves will carry out the live reading through the course of the evening performance at the Castle.

Marco De Marinis – Other Infernos. The representation of the journey to the Hereafter, before and after Dante. With special attention on contemporary dramaturgy and performance.

Stefania Maggini (President and Artistic Director for In Arce Dantis: Arte e Spettacolo) – Our story, at nearly a year on.

Lorenzo Bastida – Dante, Ugolino, and the Castello di Poppi: poetry as the voice of victims.

Bastida will be highlighting the significance of the Castle as the place of intersection between Dante’s story and that of Count Ugolino. The former, a man in exile deprived of all political and patrimonial rights, was hosted there by Countess Gherardesca, daughter of the latter. Dante wrote letters in Latin for her, addressed to the wife of Henry VII, and we cannot rule out her having learned precious details about the heart-rending agony of her father, siblings, and cousins.

Workshop participants – Reading of the results of the morning’s creation

In collaboration with the Liceo Scientifico Galileo Galilei of Poppi

Introducing the evening’s performance, some of the most famous passages from Cantos XXXII and XXXIII from the Inferno will be commented on, providing some of the various possible different interpretations.

Stefania Maggini’s production re-creates an abstract and timeless environment, but one that is also, contextually, here and now, in which Ugolino’s drama can be revealed in all its chilling, human, tragic, current conditions of impossibility. The terrible hardness of the iciness in hearts, bloodied by the violence of macabre actions, is suggested by the use of light projected from the castle’s prison tower and on the ephemeral stage scenery that envelops and swallows up everything. The tower of red light that sullies the white light is intended to underline how cold bestiality, perched upon itself, irreversibly contaminates and destroys the candor of innocence and peace.

Marco Cavicchioli’s work as an actor in Count Ugolino takes inspiration from study of the structure of Dante’s hendecasyllables, from their inner rhythm, from the dark and tenebrous musicality of the sound of the words chosen by the Poet, to arrive at the suggestions evoked in him of the stories they contain, without ever abandoning the original score, the bearing axis of the semiotics of the entire work. He assiduously avoids monologue and the prosaic in favor of a poetic and dramatic rendering, in search of Dante’s most intimate intentions. He presents himself as narrator, vocalist, and popularizer of this unsurpassed and morose romance by the Poet of Poets.

In this performance, through the cello Volfango Demi interprets Dante’s narrating voice, before and after meeting with Count Ugolino. The musical improvisation takes the spectator by the hand, leading one into Dante’s poetic vision through the means of the suggestive sounds offered by the extraordinarily expressive cello, one of the musical instruments closest to human timbres.

Demi’s performance also provides an artistic exploration of how to translate the 13th-century poetry of the Divine Comedy into classical contemporary musicality, attempting to imagine how it would be if Dante, in our 21st century, recounted his journey to us not with the pen, but rather with the bow of the cello.

Babilonia by the Taviani brothers. For many years he has been realizing one-man shows — as author, director, actor — to great acclaim by the public and Italian critics, such as, for example, La lezione, Banditen, Peones, Ombre Rosse. He has been teaching for many years at Bologna’s Scuola di Teatro and in other theater schools. He organizes theater workshops in collaboration with numerous institutions and companies, in various locations and cities.

Marco De Marinis – De Marinis is full professor of Theatrical Disciplines in the Department of Arts at the University of Bologna, DAMS – Theater, Theories, and Cultures of Performance in the Master’s Degree Program in performing arts disciplines. His scientific interests mainly concern: theatrical theory; methodological and epistemological questions implied in the theatrical study; theatrical experiences of the 19th century, with special reference to master directors, body mime, and the so-called New Theater arising in the period after the Second World War; the stage space and iconography of the theater. He is a member of the Scientific Committee of In Arce Dantis.

Volfango Dami – Dami graduated in cello from the Conservatorio di Firenze under Maestro Pietro Grossi. Even before graduating, he was called upon to play at the Orchestra of the Teatro del Maggio Musicale of Florence. Subsequently, he completed studies in cello and chamber music at Portogruaro (VE) under Maestro Alain Menier, and at the Accademia di Firenze under Maestro Roger Low. Currently he is the permanent artistic director for the Orchestra Gams of Florence. He continues his career alternating between orchestra conductor and cellist.

Lorenzo Bastida – Bastida teaches Italian language and literature in Florence and offers public readings of Dante’s Divine Comedy, commentary and recitation of the text, in libraries, universities, and cultural circles, and at places historically linked to the life and work of the Poet.

Stefania Maggini – Maggini is President and Artistic Director for In Arce Dantis – Accademia Dantesca per le Arti e lo Spettacolo at the Castello dei Conti Guidi. She graduated cum laude from the University of Bologna, Department of Art and the Performing Arts, refining and developing her innate interest in the search for the aesthetic, which led her immediately to teaching History of the Opera, Italian Theater, Diction, and Italian Language and Literature at prestigious American universities, both in Italy and in the US. She is involved at the same time with directing theater for Italian and international companies, preferring scenic compositions based on authenticity of emotions and classical forms.

“Exploring and sharing Dante’s vision excites, pleases, elevates. Being able to do this through the performing arts and the particular charm of the Castello dei Conti Guidi is, at the same time, onus and honor.”