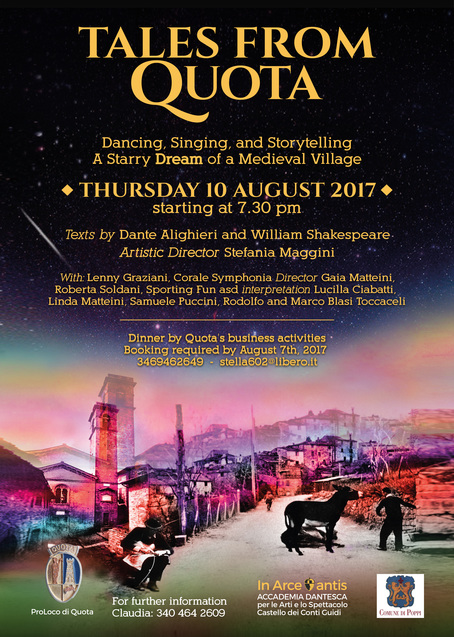 In the fairy-tale scenario of the Guidi Castle in Quota, a part of Poppi, during the night of San Lorenzo, 10 August 2017, from 7.30 pm onwards, In Arce Dantis, Accademia Dantesca per le Arti e lo Spettacolo (the Dantean Academy for the visual and performing arts) and Pro Loco of Quota, under the artistic direction of Stefania Maggini, will stage the dream of a countryside festival, imagining the celebration of a multiple wedding of several couples pairing for marriage on that same day.
At the feast we see Dante himself (Lenny Graziani), the curious and visionary pilgrim poet, being ravished by the genuine beauty of the songs (Corale Symphonia, directed by Gaia Metteini) and dancing (Corpo di Ballo Sporting Fun). He is driven by the vivid immediacy of the experience to compose, right then and there, some of the most stupendous and evocative verses of the Purgatorio and the Paradiso.

The woodland, which up until a few years ago had been the most important element for the survival of the inhabitants of the small village of Quota, comes onto stage as a protagonist, with a dance choreographed and performed by Lucilla Ciabatti. 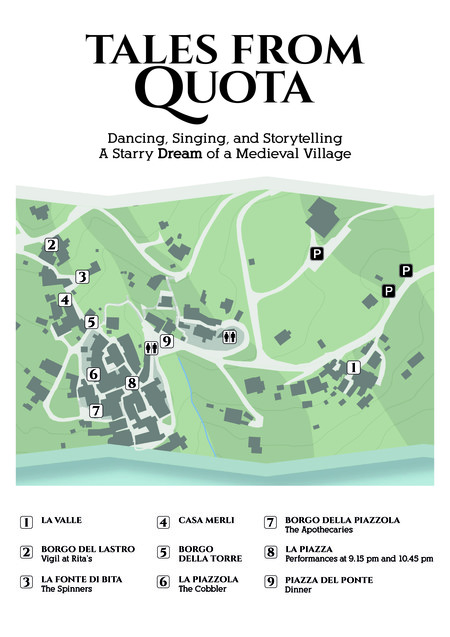 Following this we see the entrance of a magical and mysterious figure (Roberta Soldani), who will offer the elusive sonorities of the original English lyrics taken from the famous opening scene of Shakespeare’s Macbeth.

Some countrymen will be in the balconies and at their windows to tell stories true and partly true, others, in small poetic corners scattered throughout the village, busy about simple and humble activities, while still others will be among the audience, bearing their message of joy and vitality.

Entrance is free, but limited, so we suggest you arrive well in advance. For further information, please call 3404642609.