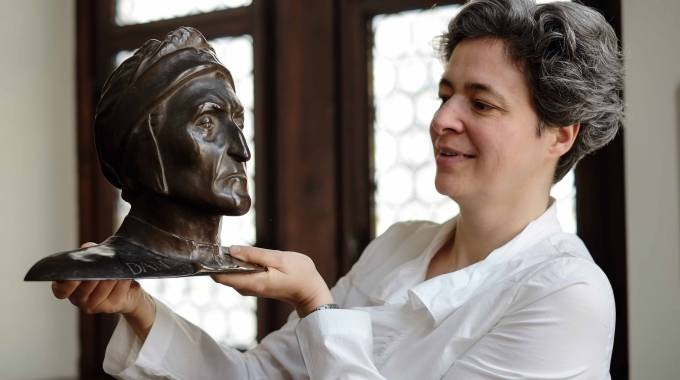 The writer was Dante, and this is the trace of his stay in Poppi, as secretary to the palatine countess. It may have been a service performed only once, for this Latin letter of good wishes and welcome to Italy, a letter in three different versions, perhaps representing three stylistic variants (Ep. VIII, IX, X). Dante, who had previously proclaimed that he wrote lyric poetry and narrative poems in the vernacular just for women who did not know Latin, composed three small, luxurious microcosms in the name of this lady.

The two women never met. Empress Margaret, considered a good and holy woman by the 14th-century chroniclers, died of the plague that same year. Of Gherardesca, it suffices to say that she was the daughter of Count Ugolino, who died of hunger along with his male offspring, prisoners in a tower, in 1288.

And it suffices to say that in 1311 Dante wrote Canto 33 of the Inferno, to which Romanticism attributed a well-deserved fortune and autonomous life: with statues, paintings, and images, endlessly projected by the sublime reticence of those triplets. And from Poppi Castle, Dante attributed to Gherardesca phrases that evoke the “mind’s eye,” with which the empress could see her loyalty, a cordial and secret virtue. It is poignant that it is through the mind’s eye that the two could know each other.

As a sublime exercise of feminine courtesy, and not, one would say, of Christian piety. And to the empress, who had invited her to tell about herself, “the condition of my state,” Gherardesca modestly limited herself to expressing the joy of good health, shared with her husband and children, and the even greater joy for the “better centuries” that the imperial couple wished for the world.

She thus remained mute about the sinister mystery of her tragedy, and quoted Virgil, from the fourth Bucolic, the prophecy of the advent of the new century.

Dante provided her with an aristocratic and highly cultured reserve, of other times already in her own time, quite different from the tone that Franco Sacchetti would later lend her in Novella 179, when, from those heights of Poppi, he had her contemplating the fertile surrounding terrains, in the company of one of her sisters-in-law, of a hostile family.

This is the most suggestive part of Dante’s history at Poppi Castle, with a countess who was able to imagine, to build refined mental friendships, and who practically danced with the highly-distilled formulas of court epistolography. This is what Poppi Castle makes me think about. And it is with great interest that I take part in the rebirth of this place, in the name of artistic creativity and of that of the performing arts.